for those afflicted with 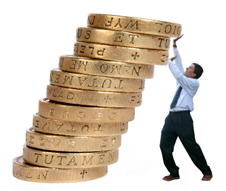 Though many try to say it is a gross over-exaggeration, or that it is quite a far stretch of severity, Sexual Addictions revolving around Financial Domination Fetishes, a ‘Cash’ Addiction so-to-speak, can be just as costly as a Cocaine Addiction; this being no hyperbole. For by “costly” we are not merely speaking of monetary losses, though such are quite large at times for virtually any sort of addiction, we are rather speaking of the costs & losses which most point out concerning the latter (the compared Narcotics addiction); the collateral damage onto neighbors, friends & family, the virtual loss of the addict’s “Self“, the ruining of one’s employment, business, contacts, social networks, et cetera. The feeling and attitude expressed by the majority, that Addiction to Financial Domination is merely one having failed the test of will per-se, is exacerbated by social media & the internet at large speaking about what they don’t understand. I give credit to The Daily Dot, for their 2013 internet article concerning Financial Domination (located HERE), which in the end had stated,

“…maybe it’s something that can’t truly be understood from the outside—the relationship between a pay pig and findom may be too intimately personal and idiosyncratic to broken down into its component parts no matter how closely one looks.“

While there are certain foundations which allow partial definition & characterization of those taking part in Financial Domination, it is a Sexual Fetish which, like all others, has an aspect of change & complexity which prevents constant defining constraints from being placed upon it. This is, in part, the reason why FinDom addiction is misunderstood. When perusing Google via FinDom-related searches (specifically looking for/at articles & pages NOT authored by participants of this sexual paraphilia), Financial Domination was defined as “an erotic fantasy” more times than a FinDom-addict’s credit-line is abused. … To be clear, Sexual Addictions connected to FinDom Fetishes aren’t alone in being a misunderstood addiction. People must realize that  Most sex-addictions (addictions based upon Fetishistic Sexuality) are not just Psychological and/or Hormonal in nature. Similar to someone having a physical dependency to Opiates (such as Heroin, Morphine, or the recently uncovered 7-hydroxymitragynine), addictions to a Sexual Fetishism can be Psychosomatic, which is a form of Biochemical Physical Dependency. So please, do not brush off or disregard someone with a sexual addiction (or an addictive problem) in saying it is just a matter of “willpower.”

This is likewise being said to those Therapists, Psychiatrists, and Social Workers whom continue to downplay (if not wholly reject) these dynamic health issues.

If you think that you may have (or be on the brink of) a Financially-based Subservient Sexual Fetish (a.k.a. Financial Domination / FinDom) Addiction, it is recommended that you take Therapist Samantha Summers’ preliminary “Financial Addiction Exam” which can be obtained by CLICKING HERE. (Please note that the aforementioned Exam is a preliminary examination, consisting of only simple Q&A, and that the Test explained below is for ‘accurate’ addiction measurement.) If you happen to receive a high score on the Financial Addiction Exam (i.e. you tested as having a high potential for addiction to the Financial Domination Fetishism), you are strongly advised to take our “FinDom Addiction Diagnostic Test” (the entirety of which is available to registered users on this website) which may be found via the image below:

The First transition to FinDom Therapy is

Admission of that Addiction,

But not as the clichè confession!

Above we see an image taken, given, and used by one such person presently partaking in the S.S.I.’s Counter-Addiction Program (being under the Bona fide guidance of Therapist Samantha Summers™ in his progression towards being commander of his Fetishes instead of being commanded).